Zach Malvik grew up in Holmen, and played basketball during his years at Holmen High School and Winona State University where he won a National Championship and was named the All American Point Guard by the NCAA. He was then recruited to play professionally overseas – first in Europe, then in Australia.

It was while playing for the Club Kilsyth Cobras that he landed on another player’s foot – the other guy was fine, but Zach’s left foot was broken. Zach said, “It was the middle of the season and that ended it for me. I flew back home.”

Zach had two surgeries on his foot and knew he needed physical therapy in order to be able to return to basketball. He had previously worked with Steve McCoy, an Achieve physical therapist and certified athletic trainer, and gave him a call. “I went to see Steve and he has been with me every step of the way, working toward my goal of being able to play again,” Zach said.

“Because of the nature of Zach’s injury and subsequent surgery, he was left with motion, strength, and balance deficits that were limiting his ability to return to the rigors of competing in basketball at its highest level. We needed to find a way to give him time to heal while continuing to progress his strength and agility workouts,” Steve said.

Zach said that the hardest part of therapy was trying not to go too fast. He said, “Steve kept the reigns on me and helped me get back to where I needed to be. With Steve, I felt confident. He worked with my doctor and spoke with him, pushed me to do what I needed to do, but made sure I didn’t push too hard too soon. He gave me a plan to follow and we had goals for each week.”

Zach added, “It’s hard when you’re coming back from a serious injury to know what to do, when to do it, and how hard to push – Steve really helped me with that. I think his training in sports medicine made a difference, his expertise was one of the big reasons I wanted to work with him.

“The main thing was improving my range of motion in my ankle, and it took quite a while. We also had to work on getting my strength back after being on crutches for 1 ½ months after my first surgery, and another month after the second one.”

Today, Zach says he feels like he’s back 100%. “I don’t even notice the injury anymore, and I’m cleared to play. Steve worked me back into it slowly, but now he lets me do what I want. I still have to do some therapy every day, and expect that I will be for awhile, and that’s fine with me.”

Today Zach works out with one of his college teammates once or twice a day, and follows his rehabilitation program. “My whole day revolves around getting myself ready to play,” 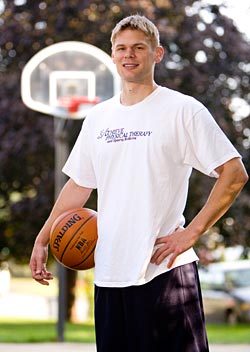 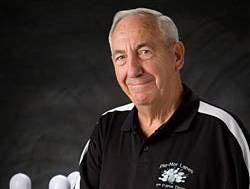 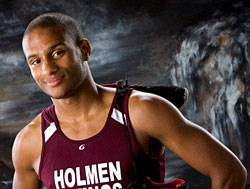