Track standout Max Jessesski was playing a game of 7 on 7 football, the non-contact, all passing game in June. “I was running by myself and my foot stuck in the ground. I heard a sickening pop in my knee and felt excruciating pain. I went to the ER, and they were optimistic, thinking I had only sprained my knee. I had track camp the following weekend, and I was in so much pain I had to sit out the whole time.”

Further evaluation and MRI showed that Max had torn his anterior cruciate ligament (ACL) and his meniscus, the fibrocartilage that protects the knee. Max would need surgery to repair these injuries, but before surgery, he needed to strengthen his leg.

Max turned to Steve McCoy, physical therapist and sports medicine expert with Achieve Physical Therapy. Max had a previous injury to his quadriceps and had worked with Steve to resolve the issue.

Max said, “I got to know Steve and what he was capable of and I felt a good connection with him. I knew that for this more serious injury, I wanted to work with him again. Achieve got me in for an appointment with Steve the same day I called.”

Max met with Steve for therapy twice a week for 6 weeks until Max’s surgery on August 16. Therapy began again the day after surgery and continued 2-3 days a week for the next 7 months.

Max said rehabilitation was a challenging process. “Goals were set for Max to work toward along the way. At first, it was just getting the knee to bend, then balancing, then walking. Fortunately, my first day walking without crutches was first day of school.” After he mastered walking, the track star needed to be able to run.

Max continued to work with Steve, and when track season started, he was running, but not yet at 100%. “It was very frustrating for me,” Max said, but he persevered, kept getting stronger, and continued to improve. And then he started to win races. He said, “At conference I won the 100, 200 and the 4 x 1. Then I went to the State Meet and placed in the 200 and 4 x 1. I was really pleased with my performance at the end of the season.”

Of his rehabilitation, Max said, “I felt really comfortable with Steve, and I trusted him with my leg, he encouraged me a lot. His training in sports medicine made a difference and he understood what I needed to get me back running. When I was still in my brace, I really wanted to get out and walk. Steve convinced me to be patient that recovery now will pay off in the end.”

Steve said, “Max is a great athlete and was a hard worker. It was a pleasure to see his progress over the months. The fact that he went from such a serious injury to winning races at the highest levels of competition in less than a year’s time is truly amazing, and speaks to his natural abilities and determination.”

Max graduated from high school in 2012. He will attend UW-La Crosse for an education degree. He will also be on the track team. He says, “I’m 100% now and ready to go.” 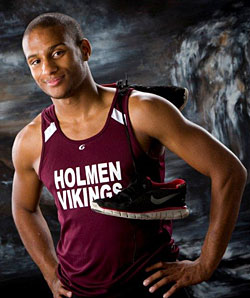 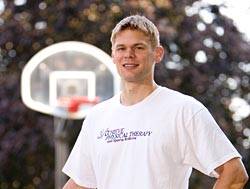